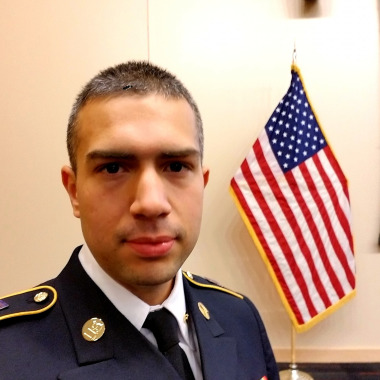 Republican,
Healthcare Worker, and Veteran. Member of the Social Services Commission for the City of Stamford. Graduate of NYU with a degree in Public Administration.
[email protected]
(203) 543-3085
Candidate website
I am proud to have lived in the West Side area of Stamford for the last 10 years and I look forward to raising a family here with my wife. I have worked well with people from all ethnic backgrounds to realize community projects such as area clean-ups, artistic collaborations and mentorship programs for the youth.

As a Latino growing up in public housing, I understood early that to succeed I needed to live up to values such as integrity and discipline and not rely on the empathy of others. Through years of study and hard work, my sister and I became the first generation in our family to attend college and to become homeowners.

My opponent instead seeks to begin his career in public service through deception. He is facing credible allegations for voter fraud that most likely will result in conviction. There are elected officials from his own political party that have claimed under penalty of perjury that Mr. Paris had attempted to violate multiple finance laws. These facts will remain on public record and do not set a good example to our youth.

There are so many residents in Stamford I have met who deserved that State Representative nomination from City Democrats. Mr. Paris is moving into Stamford just because of this election. This is opportunistic and not fair to our own diverse citizens who have served Stamford throughout the years.

Competence and integrity is important even in times of challenge, regardless of skin color.
Despite having good intentions, The Stamford delegation we have sent to Hartford comprised for the last decade has failed us. Despite all of us paying the most in taxes, it is always Stamford that has bailed out other cities in Connecticut. The ones who have suffered most with this reality are our students. for example, our tax dollars are being redirected to poorly performing school districts statewide. In the 2021 fiscal year, the governor proposes $187 million in Education Cost Sharing (ECS) grants for Bridgeport, but a measly $13 million to Stamford Public Schools.

This waste and disparity in tax dollar distribution is hurting Stamford’s schools, but even worse, the students it aims to serve. Redistributing Stamford tax dollars to other towns also has an added cost: higher property taxes. In the legislature, I will oppose any budget that drastically underfunds Stamford schools.
The COVID-19 Pandemic has caused many economic disparities in our community. The American Rescue Plan Act of 2021 provides opportunities to not only provide aid to those affected, but to create a permanent pathway for long term economic recovery for the 145th District. Small businesses are a priority when it comes to Stamford’s economic recovery from the pandemic. Many individuals rely on their businesses to bring revenue. They also bring job creation to the district which is essential to the economy. Already, creating a small business is a long and tedious process, The American Rescue Plan will ensure that small businesses will be able to easily flourish and allow for pre existing ones to expand their business in our district.

Another use for The American Rescue Plan will be dedicated to provide assistance to the workplace, in the form of funding Workforce training programs. This is an essential to creating a more robust environment in the workplace and help individuals be prepared in their jobs. Stamford's own Cradle to Career is an excellent organization that can help realize this vision.

Infrastructure development in Stamford is a priority when it comes to the development of our district. The American Rescue Plan is a great opportunity to address pre-existing issues and finally provide change in our district. Taxpayer money has been misused in Hartford and prioritizing Infrastructure with The American Rescue Plan can change this, and the residents of the 145th district will benefit given our central location.
I would like to offer my condolences to the family of Mr. Courtney Lewis after their recent tragic loss. I wonder about all the great accomplishments the future had in store for this scholar-athlete.

What can we do as a community to prevent this from happening? Regrettably, this latest incident is another example of the increase in crime in Stamford and is reflective of a bigger pattern in Connecticut.

Public Act 201 titled "An Act concerning Police Accountability" has had a negative effect on police recruitment and has been a factor in emboldening individuals to commit crimes. This law has gotten in the way of hiring good police officers. Police agencies are becoming more diverse and provide good career opportunities to young black and Latino professionals who have respected law and order, have led honest lives and look to serve their communities. This act needs to be amended for our men and women in Uniform.

I recognize the struggle that minorities have had to endure in the United States. The fight for social justice and the respect for law enforcement should not be viewed as two mutually exclusive concepts. It is possible to be an advocate for both ideas.

I also pledge to break from party lines if need be, to advocate for stronger gun laws to ensure that only qualified citizens have access to guns, while limiting access to high-caliber assault weapons that should be reserved only for properly trained professionals.