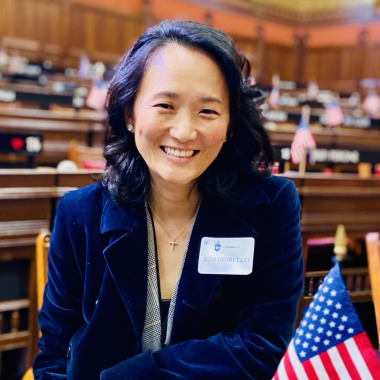 I CAN STOP bad bills – I successfully led a movement to stop a spate of zoning in the 2021 and 2022 sessions. Stamford Neighborhood Association endorsed me, Sept 21, 2022, "Kimberly galvanized grassroots legislative support to protect our towns and defeat a wave of zoning bills coming out of Hartford that would diminish local voices and local decision-making on matters pertaining to zoning and land use."

I CAN PASS good bills –I co-introduced the CT Food Donation bill with a Democrat peer and worked to garner Republican support by changing mandate language. It passed with unanimous support. "Not many people know about this success story and the key role Rep. Fiorello played," writes Mike Sigal, author of NY Excess Edible Food Act, Sept 30, 2022. "We want to make sure the community knows what excellent work she did."

I read the bills and can quickly process information to key salient points. I find subject matter experts to better understand the bills. I am not afraid to ask questions during debate. Most importantly, I report back to the people as much information as I can. I inform my constituents about public hearings that need testimony and the results of the legislative process so they know what their state government is doing. Constant communication is key via social media posts, email blasts, opinion editorials in the newspapers, and town hall forums.
ECONOMY is priority #1-- Inflation is especially painful and crushing for Connecticut residents because we live in a state with already some of the highest cost of living expenses in the country. I believe you should have the freedom to spend the money you earn as you see fit without Hartford taking an excessive first "cut."

I will continue to: (1) fight back against taxes and fee increases, wasteful spending, unfunded mandates, and corporate welfare that are driving up the cost of living in Connecticut; and (2) fight for good clean bills that bring accountability and transparency to government programs, that lower taxes and fees, and that reduce red tape.

I have the official support of both CT Realtors, which represents nearly 20,000 members involved in real estate, and the National Federation of Independent Business, our state's leading small business association.

PUBLIC SAFETY & LOCAL CONTROL are tied for priority #2.
We have rising crime throughout our state, including in our district, exacerbated by the misguided Police Accountability Bill that proscribed police work. I am endorsed by both the Stamford Police Union and the Greenwich Silver Shield Association. I will continue to uphold law and order, protect victims' rights, and work to fix the Police Accountability bill.

At the same time, I will continue to stand with parents to oppose bills that remove parents from decision-making for their children's educational and healthcare choices. And I will continue to lead the effort to protect our right to local zoning decision making.
Back in 2014, a similar referendum question was: "Shall the Constitution of the State be amended to remove restrictions concerning absentee ballots and to permit a person to vote without appearing at a polling place on the day of an election?" We rejected this, voting NO 52.03%, YES 47.97%.

This year, proponents are back with a vague, less negative question on the ballot: "Shall the Constitution of the State be amended to permit the General Assembly to provide for early voting?"

I support early voting through the mechanism that is already in place – we CAN vote early in person via absentee ballot at the town clerk's office for 30 days before election day.

So, what is this vote about? It is about challenging the concept of “election day.” Instead of marking Election Day on our calendar, we would start to mark 10, 15, 45 days as Election Time. Voters will start to be urged to get voting done earlier and earlier, while candidates are still getting their information about their positions out.

Connecticut has turn out at 70.2% vs the highest state Minnesota at 79.8% and the lowest state Oklahoma at 55.3%, according to the U.S. Elections Project. Note, France with 67 million people votes on ONE DAY with PHOTO ID and PAPER BALLOTS with proxy voting and no absentee or early voting.

I urge voters to use the current early voting mechanism via absentee ballots in person at town hall and to reject this vague, opened-ended constitutional change.
Abortions should be early, safe, legal, and rare. I do not support criminalizing abortions. I oppose laws that make abortions less safe, which is why I voted against HB5414 that allowed midwives and nurses to do surgical aspiration abortions. This bill had bi-partisan opposition on the basis that it was increasing risks to women's health. I support parental notification of abortions for girls under 16. In Connecticut, statutory rape is sexual activity with a minor under 16 - if a minor has been raped or sex-trafficked, I believe parental notification can help in the process of bringing justice to any victims